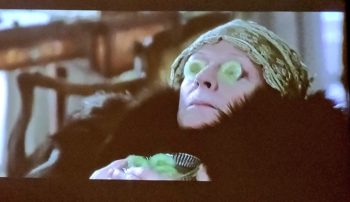 Things that are helping me calm the F**k down

Let’s start this post with a simple rule. It’s April Fools, but as was stated so eloquently:

Now that we are sure that this very important rule is crystal clear, I can begin. My last few entries here have been posting about quarantine life. How things have been going, about how it’s been difficult and scary, in different ways, for all of us. About how people have been insane. I’m not the only one doing this, of course. Many people are doing this now – be it in writing, like me, oral histories (IG stories, TikTok videos, whatever other technology that I don’t even know exists because I’m too damn old…), painting, singing, whatever. And it’s been a wonderful outlet – reading and seeing so much of this sharing, this creating, is amazing. But, sometimes, you just need to turn your brain all the way off, and think of nothing. I know people who have been reading more than usual, which is of course amazing. Sadly, I haven’t had the presence of mind or focus to do that. This may last a while, so hopefully I can get back into it, because I do love reading. Instead, I spend my time watching a lot of silly and useless things, and they bring me joy, and calm me down. So yes, you can read, you can paint, you can plant a garden and write music. But if you’re like me and need to stare at something fun and funny, have I got a list for you.

1- Graham Norton YouTube clips. Have you ever watched the Graham Norton show? It’s great. He gets a hodge-podge group of celebrities together, gets them liquored up, and hilarity ensues. It’s never mean, but it’s often hilarious, and definitely NSFW. However, since work is currently in your living room, I’d say it’s ok. They’ve even prepared a Working From Home Playlist of their best clips. And there’s this story, that is my absolute favourite. I don’t even know who Greg Davies is, but he is pretty much my favourite teacher-comedian. (Thank you @AllisonNeapole for sharing this with me. I lose my shit every time I watch that story).

2 – iHeart Radio Living Room Concert. So the iHeartRadio Music festival is one of those live music festivals that happen every year. I doubt very much that I will ever go to one of those festivals by choice. People are drunk, the place generally smells like piss unless you’re in a VIP section that I definitely can’t afford, and the tickets for the great bands are usually sold out before you even realised they were on sale. However, this year, because of COVID-19, they did a separate concert – a living room concert, supporting a number of different US Charities. Some great bands, streaming live from their living rooms, singing the songs you love. This happened a few days ago I think, and I just caught the YouTube clips today. As usual, I’m behind the curve on these things, but it has been fun to watch the clips now. There’s Mariah Carey, who whether you like her music or not, still has an insane voice. There’s Billie Eilish & Finneas, ever too cool for school. And my personal fave, a video that I think I have seen at least a dozen times today, the Backstreet Boys. That’s right, I said it. Not even ashamed. Special shout out to Kevin’s kids who are ALL IN, and Brian’s insane pants.

3 – Celebrity Gossip. Wait, hear me out!! Celebs thrive on attention. They will die without it. For many, it’s the reason they are famous. And so, in these mad times, they are dying to give us some great content, because they don’t want to be forgotten. Be it on their social media profiles or by their inane and insane behaviour that gets reported, there’s always something to amuse. My favourite blogs are Celebitchy and Lainey Gossip, because it’s definitely gossip, but also social commentary. Because what is the study of celebrity if not an insight into our times? By looking at who reaches the highest of heights of fame, and why, we can get a great understanding of what is important in today’s society, and by extension, what needs to change. And to be honest, some are just hilarious and fun to watch.

4 – Some Good News. I don’t know much about John Krasinski. I liked A Quiet Place, but I never watched the Office (I know, don’t judge me. Every time I see an add or a clip it just annoys the heck out of me), so I don’t know his artistic work, so to speak. However, the other day he did something very cool. He sent out a call on Twitter asking for some good news, looking for some positive stories to share, to lighten the load. He took the idea and ran with it, and created this cool little show, SGN. There’s only one episode so far, but here’s hoping there will be more.

5 – Sir Patrick Stewart reading sonnets. My second favourite Captain has been reading Shakespearian sonnets every day on his IG. They are beautiful, they are relaxing, and they make me feel like I am somewhat cultured, even though I am clearly not. Go to his Instagram to hear them. It’s fabulous. I think he’s doing this on Twitter too.

As a final note, I KNOW everyone’s been watching this strange Tiger King whatever show, and it’s making everyone crazy. Supposedly it’s a must see. I may get around to it eventually, but I also feel like it might actually piss me off more than anything else? If I do get around to seeing it, I’ll write about it. But for now, I’ll let you all just keep telling me about it.