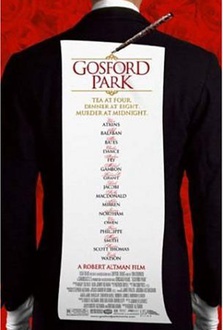 “Do you think he’s the murderer? It’s worse than that, he’s an actor”

If you love Downton Abbey, then you must have seen, loved, or at least heard of, Gosford Park. Gosford Park is Downton Abbey’s Mother, Father, Grand-aunt and spiritual advisor, and anything good that came from Downton (and there were so many good things), were actually born in Gosford Park.

It’s the story of, you guessed it, a wealthy British Family in the 30s and their servants. A murder occurs, there’s an investigation, and through it all, we get a sanitised look at noble and servant life in the 30’s. It’s a wonderfully fun movie, filled with fantastic one liners and even better actors. So many wonderful names: Maggie Smith, Kirsten Scott-Thomas, Micheal Gambon, Charles Dance, Stephen Fry, Clive Owen, Helen Mirren… and more! It’s not your usual (or at least my usual) fast past action film, but if you don’t pay attention, you’ll miss some pure gold. It’s an absolute treat.

Here’s a list as to why you should see the movie, especially today in these scary times.

5. British Snark is the best Snark

Constance: “Aw, it’s a pity, really. I thought it was a good idea to have someone in the house who is actually sorry he’s dead.”

Kelly MacDonald as Mary and Maggie Smith as Constance

4. Clive Owen at his tortured best

“Can’t a man hate his own father?”

3. The Maggie Smith Side Eye

2. Helen Mirren not looking glamorous, but still being amazing. And heartbreaking. And infuriating

“I’m the perfect servant. I have no life.”

1. The most vital lesson for these difficult times: We must all learn to diva à la Maggie Smith

Header Image Credit: Movie Quotes. Other images I took while watching the movie…