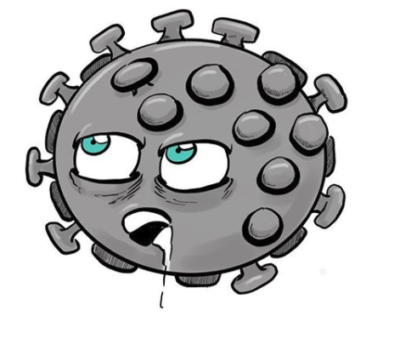 Those of you who are friends with me on social media (IG, FB and Twitter – I am not cool enough for TikTok, and to be honest I don’t care enough either) know that I have been posting a lot about COVID-19. Mostly jokes and memes, but also some rants.

Like today for example. I’ve been in self-isolation for 9 days now. I’m doing it because Mr. A was exposed to someone who tested positive at work – so while we both feel fine, we could be asymptomatic. But there’s a second reason. I am asthmatic, and I’ve also come out of a very nasty year where I have floated in and out of depression. So between the two, my immune system is fragile (link to depression and weak immunity here, here, and here). Before all of this chaos, I’d been on a serious path of getting my strength back – exercise, healthy eating, all of it. This disease throws a wrench in all of that, to be sure.

I do my best to laugh though. I love telling jokes, and I am a snarky bitch. Anyone who knows me knows that. Laughing is the way I heal. But it doesn’t mean I am not afraid.

I went out today. I needed to go to the pharmacy to figure out how to get my asthma medication. I haven’t found a GP since moving to Zurich, so I’ve still been using my Geneva doctor. And to be honest, I didn’t really want to change, because she’s awesome. So, I wanted to know the possibilities of stocking up on my asthma meds without having to do another medical visit to get a prescription. The walk to the pharmacy was fine. Not a lot of people on the roads, and those that were out were respecting distances. Cool. However, that all went to shit when I got to the pharmacy. There was a group of children, between the ages of 5-10 I’d say, all running around and playing on their little scooter / trottinettes nightmares, while their parents sat around and chatted. Let me repeat for the people in the back… IN FRONT OF THE PHARMACY. The exact place where the elderly and the immunocompromised (like me you stupid motherfuckers) would go in a time like this. Are you fucking kidding me?

Now, I understand, it must be hard for parents to entertain their children all day. I’m not even being snarky, I truly believe that. Kids can be a real pain in the ass, and these days they just don’t know how to entertain themselves like GenX kids did – yes, I said it … KIDS THESE DAYS). I don’t blame the kids though. Not the ones by the pharmacy today, nor kids in general. I blame their dumbass parents for helicopter parenting and for being irresponsible fuckwits who only care about themselves and their “oh poor me Is have to care for my offspring.” Fuck you. Seriously. Fuck you. I have zero sympathy.

There’s also those who are all “we have to live our lives”, and “the elderly have to die at some point.” I’ll say it again for the idiots in the back – how did our society get to a point that we simply want to cull people out so that we can keep going shopping and to the pub as we wish? What the hell happened along the way?

Their irresponsible behaviour are putting people like me, as well as the elderly, and just their fellow humans in general, at risk, because they can’t act responsibly and behave with some kind of civic decency and solidarity.

So I joke, I laugh, I share a lot of memes that hopefully give light to others, and I’ve been ranting more often than not on this blog lately. But am I afraid? You bet your ass I am. And I’ll continue to be afraid as long as people keep behaving like selfish fools. On a more positive note – at least I have enough toilet paper to weather the apocalypse. Or at least a bad case of the runs.

Image Credit: My friend and colleague @dilo008. Follow him on Instagram and see more of his great drawings!!