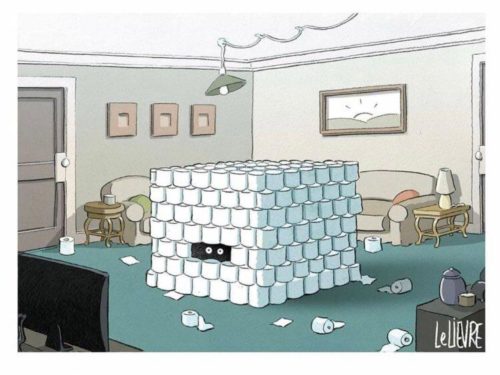 Mr A and I decided to quarantine this week, and clearly, as Europe goes into lockdown, we made the right choice. And so, sitting comfortably in our home, already prepared with everything we need, we laugh at all the images of people buying ridiculous amounts of toilet paper and pasta. But if I’m perfectly honest, I wasn’t that different. When we hit the supermarket to get supplies, the first thing I did was go for the toilet paper. We didn’t even need it, we still had some. It was however, in my mind, the most important thing on the list, before any food items. Before chocolate even! So ya, I laugh, but I also get it. I get the buying of too much pasta, of the toilet paper, of the canned goods, all of it.

Where does it come from? Chances are, there are a ton of people much smarter than I am who have done studies on this sort of thing (and if they haven’t, they should). I think it probably comes from a number of things. First, and the most obvious, is fear. We’re used to having what we want, when we want it. Be it food, travel, goods, whatever – everything is right there, all the time. Suddenly, we’re told it won’t be possible, at least not for a while. Not sure how long that while will be. In the meantime, we see images of other countries, China, Italy, all locked down. We hear about France and Spain closing everything. Then schools are closed. Then bars, theatres, restaurants. We get scared. We run, we don’t think. And we buy as though the Luftwaffe is on it’s way and we won’t be able to go out in daylight for a long time.

Second, and let’s be perfectly honest, we also panic buy because we have very little trust in our elected officials. In most countries, people panic buy (those who can), because they immediately jump to an “every man for himself” mentality. No one is going to take care of us, so we have to take care of ourselves. Too often have our governments failed us – through nepotism, corruption, inefficiency, or general protection of the ruling elite – that we feel, deep down in our guts, that if shit hits the fan, the governments will only look after themselves and their rich allies, and the rest of us will be left to rot. I’m not even saying that it’s true in most places (though in the US it clearly is – no state of emergency declared until all Trump’s CEO buddies companies were informed and prepared? Bitch please) – many countries have taken measures to care for it’s population.

Third, people don’t understand the disease or how it’s spreading, and so they feel like they’ve lost control. This article explains it pretty well. There’s a retired doctor in the UK, Dr John Campbell, that has some great YouTube videos about the pandemic, and he explains it in a way that is both easy to understand, but also calming in that he doesn’t feed into the hysteria. Mr A watches the videos daily, and it’s how we better understand what’s going on and what to do.

Forth, and this is the most obvious reason for me, is that most people are fucking stupid. I mean it. They are. Universities are cancelled because of a pandemic, so what do students do? Hold giant going away parties before they go home. The government makes an announcement declaring emergency measures, and the next day terraces and restaurants are full, people not respecting spacing at all. Or football matches are cancelled to protect the fans, so they all meet outside the stadium to cheer anyway. Or else they hold a giant parade of people dressed up as Smurfs. Many don’t care most of the deaths so far have been the elderly or those with other health conditions (see this article for doctor’s take on it), so they run around and travel and continue to spread the disease without a care. I’m healthy, so what does it matter? When did we become a world where we will destroy each other over belief systems but we don’t give a shit if 20% of the population dies?

As for the toilet paper? Well, I think it’s a decency thing. We can imagine ourselves potentially without food, but being unable to clean our own excrement off of our bodies in the way we are accustomed? It’s too much for most people to handle, even if it isn’t logical.

I’m sure there are more scientific reasons as to why people panic buy, but those are the ones that come to mind for me. While you’re all out there getting your toilet paper and pasta boxes, I’m at home training to be Lara Craft with my Zombie killing knife in hand, waiting for the apocalypse to come. Panic, me? Never.