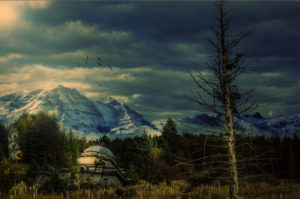 Well, this is a serious fuck up, isn’t it ? An honest to goodness, first level cock up. The last time you guys fucked up this badly, we sent you a plague. Before that, there was a fucking flood. And despite that, you still haven’t figured your shit out. The thing is, it’s not just me and the Old Man that think this … ALL off us agree. The brothers, sisters, cousins, the entire extended family. Even the old grumpy bastards that no one ever really deals with anymore, except in your movies (fair enough, they were cooler than we are). We all agree. We’re watching you every day and it’s like watching reality TV – we think it just can’t get any worse, and then it does. It just fucking does. You are the most stubborn creatures ever created, and yes, that means you’re even worse than cats.

Just to let you know, I blame the Old Man. We all do. He was the one who was so benevolent and kind and was all: “oh look at those beautiful creations and their beautiful consciousness. I am such an artist! The only thing that would make them even better is free will!” Instead of spilling a few drops when you were still monkeys, he poured the whole fucking bottle in. It’s true that it helped you evolve into humans, but it also helped you to evolve into total and complete fuckwits. Each of us came back and warned him about what you were doing – we were all over the world, with different peoples, at different times, but you showed us your true colours every time, and we told him so.

What makes us so angry is that we watch you worship us and put words in our mouths and commit the most ridiculous acts in our name, but as you’re doing that it’s painfully clear that you’re just not paying attention. There’s a reason you didn’t all evolve to be the same shape, size and colour. There’s a reason we gave you the ability to communicate in the most ingenious ways. There’s a reason we have you the power of the idea. There’s a reason, a beautiful reason, for all of this diversity. But instead of using those magnificent brains spiced up with the Old Man’s special sauce to try and understand and appreciate these reasons, you choose to abuse, enslave, demean, torture and hate each other.

We did make one serious mistake though. We thought that the whole “love thy fellow man” thing was quite clear, but I guess we’re the assholes for not specifying “love thy fellow living creature no matter their race, religion, gender, sexual orientation, Star Wars versus Star Trek preference, Hogwarts House (Ravenclaw 4eva), DC versus Marvel affiliation, or any other distinguishing or non-distinguishing feature that differs from yourself, etc.” But have no fear, we’re taking notes for when you kill your planet and blow each other up and we have to start again. Luckily the life forms on the other planets are not the assholes you are (the reason they’re not coming to see you, just FYI), so we don’t have to set up a whole new big bang, just a planet for you douche canoes. If we even bring you back. Might be better that y’all stay as monkeys.

Honestly, none of us around here understands why you still exist at all. We’ve been petitioning the Big Guy to do something – even just a couple of well-placed lightning bolts will do ( I know a guy who can do the job quite credibly, even if he is a bit out of practise) – but he is adamant that we do not step in again, that you are so magnificent that you will work yourselves out of this dumpster fire that has been the last two thousand years. Two steps forward, one back, he says. He believes in you. Well, guess what. I don’t. It’s more like two steps forward and seventeen back with you people, especially lately.

Ok, yes, I’m being very negative here, and perhaps a bit moody. We do see that many of you are trying to change things, and that there are good people out there, working hard, trying to make a difference. We are as disgusted as you are that the world is filled with slum lords, paedophiles, kidnappers, rapists, dirty politicians and corrupt business men, human traffickers (bloody hell you guys are all such assholes this list is killing me), wife beaters, abusive sports hooligans, cult leaders, murderers and all the rest (as an aside, if you could stop electing irrational, homicidal, narcissistic fools into office that would be amazeballs).  To you all I can say is keep pushing. As we watch, we are rooting for you. Rise up and push back.  It’s up to you to take responsibility for this world.

Know that we’re all cheering you on because while we do want to blow the place up and start again, it’s a lot of fucking work, and essentially we are a group of entitled lazy fucks. And while the Old Man’s “I told you so’s” would be really fucking annoying, we’d be ok with it. So get to it.

The ones for whom so many assholes speak without actually knowing who we are.

The Truth About Why I Quit …