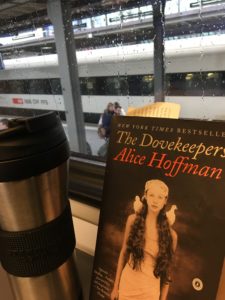 Some books are easy to read. As a friend of mine says: they are like cotton candy. You gobble them up, but very quickly forget what you ate. This is not one of those books. It is not a book you can gobble up in one sitting, and it is not a book you will easily forget once having read it. It is intense.

The Dovekeepers takes place in Jerusalem after it fell to the Romans, in and around 70 CE. Some of those who fled the city ended up at the Masada stronghold, and Dovekeepers is centred around the story of four women in that stronghold: not just the lives had there, but how they got to Masada, and why. It is split into four parts, each told in the first person, the perspective of each of the women. The women are strong and independent, their stories are wild and painful, what I imagine to be a realistic snapshot of what it was like at the time for such women, in such circumstances. But it was more than just the realism that got to me here, it was the weight of their stories, the humanity woven into each character, who were never naïve enough to think they would be worthy of a happy ending. As you through the book, you can’t help but want to follow them through their journey, even though you know how it will end.

There are a few things that slowed it down, making it a bit onerous to get through. First, the writing was overly descriptive, unnecessarily so, and thus was at times tedious. There were moments where you had to stop to think about the use of certain words and whether they were appropriate in that context, which then took you away from the story. Next, there was the constant interweaving of Hebrew words into the text, at times explained, sometimes overly so, and other times not at all. These often didn’t add much to the story and once more made the reader (like myself, who is unfamiliar with the language) pause unnecessarily, losing your way in the story.

There is the question of the validity of the source material, which you can find on book forums and in Goodreads reviews if that interests you. I didn’t delve too much into that, as it is an oeuvre of fiction, and so I simply choose to take it as I take all historical fiction: enjoying the historical elements all while remembering that it is not a textbook.

Overall an interesting read, but as I stated in the beginning, it depends what you’re looking for.